Kameel is situated in the north western part of the Limpopo Province, close to the Botswana border 85km north of Thabazimbi – about 2hr45mins drive from Johannesburg.

The area is considered as a dry area (425mm pa) and is actually close to Kalahari Bushveld, as witnessed by the Camelthorn and Witgat trees as well as the firm sand that covers most of the farm.
Home 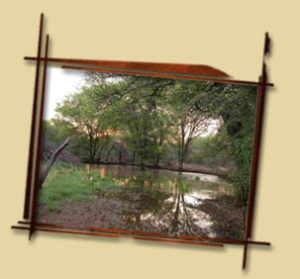 The farm is managed as a hunting/conservation enterprise with emphasis on sustainable usage of the natural resources.

Situated roughly in the middle between the Crocodile; Matlabas and Limpopo rivers, excellent water resources are found deep below the sands, with the average depth of water around 100 meters.The huge marula trees bear witness to this wealth that no money can buy.

The farm is divided into three main ecozones namely the lower acacia veld with knobthorn and other acacias sharing their space with the ever present sickle bush; the middle veld which is dominated by that incredible firewood red bushwillow (interestingly enough the mainstay of browsers) and the majestic marula and the top veld with its weeping willow, velvet bushwillow, drolpeer, camel thorn and wild seringa – veld favoured by the resident sable.

Come and enjoy this gift of wildlife with us!